Interviewed and called a lenswoman for the first time in my life and photographed in The Norfolk Hotel, from a rather unflattering angle (we photographers can be so critical!), the feature appeared just after the Kickstarter campaign that enabled the publication of the Limited Edition of With Photography® — not just an autobiography in 2014.

‘She was five when she started taking photos, the inevitable Kodak 127 Brownie in her hand. Her pet rabbit Smokey Joe, any number of oddly-named animals on the family farm – including ‘Lamby’ the psychotic sheep – family members too, all grist to her snaper’s mill.

So far, so ordinary. Except that unlike the rest of us, Sally – a business travel consultant turner entrepreneur turned photographer – kept every single image she’d ever taken, so fascinated was she by the Brownie’s ability to let her create them. “I suppose I have more than 1000, 000 images now,” she says, “Probably not much by modern standards.”

Not sure about that but what is certain is that Sally is obsessed, not only with the physical act of photography but the reasons why so many of us feel such a strong pull towards it.

“For me it started very early on because we were quite poorly as children and to distract us our mother would get out the big box of photos of the family and tell us about Great Aunt Nell who was the first Englishwoman to fly over the Alps and this kind of thing, and I was fascinated,” she explains. (Sally’s family are a fascinating bunch, her Great Aunt Helen married George Piggott, Lester Piggott’s uncle.)

As she started to examine photographs more closely she became intrigued, noting the ‘embedded layers of meaning’ within images. “With a picture I can look back and see how I was feeling when I took it but can see layers with different meaning,” she says. She believes she subconscious ‘put things’ in pictures so that she could ‘read’ them later on.

When you learn that she suffered ‘childhood trauma’ and an horrific car accident you can begin to understand, especially the exquisite titbit that she spent TWO YEARS recovering at the luxury health resort Champneys. Sally’s enthusiasm for her these is the main driver for the book which runs to 432 pages and took three years to produce. “It was a real job of work,” she says. “I hope that when people read it, yes, they will see it is an autobiography at some level but not just an autobiogray because the plan is that by reading it people can make their own realisations.

And if readers notice any similarities between this work and the fabled Susan Sontag tome On Photography Sally is content. “The title is a subtle hint towards it,” she says. Why ‘With’ Photography? Because I have lived with the medium,” she says.

The book will lead, she hopes, to other work — she’s already contemplating a project involving Dorset locations, because since moving to the ‘edge of Poole’ in 2007, she has become besotted with the area. “I knew I wanted to live near the coast but I didn’t know where,” she says. “I got in my campervan and travelled to Suffolk, Bath and Bristol, Brighton and Whitby.”

After being told that Christchurch was a gem she travelled there and agreed, but decided to tour round Bournemouth because she was down here. “I just though ‘this is where I want to be’ because it’s so lovely and quirky, there’s always something going on,” she says.

Pausing to put a tick on her map, she parked under a street lamp and realised that next to it was a house for sale. “I rang up and the agent asked if I wanted to see it. I said yes, now please and in I went’”

Her offer was accepted and now she is filled with enthusiasm for her adopted home.

“I’m actually glad I wasn’t brought up here because I would never have travelled anywhere ever even left,” she says.

– With Photography is available from the Westbourne Bookshop. 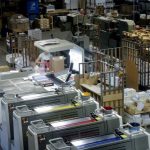 With Photography® — not just an autobiography – March 2014

With Photography – not just an autobiography Sally Hedges Greenwood ARPS, in conversation with Patricia Ruddle