The concept is unusual. Using her own photographs and those by outside contributors when her story demands it, the book is an expansive exploration of the medium led by photographs that illustrate the different and varied uses of photography, from the Victorian era until now.

Given a camera by her grandfather when five years old because she had excitedly spotted an actual camera obscura image projected onto a wall in her house, Sally became the fourth generation of photographers in her family, the first being her great-grandfather long before the Kodak revolution brought photography to the masses.

From the many threads of more general interest that Sally explores in With Photography, one is concerned with using photography as therapy. When very young, on occasions when childhood illnesses confined Sally to her sickbed, family photographs became a solace and method of communication between her and her mother, which was strangely lacking otherwise. In this way, Sally was given a sense of belonging and a grounding that would serve her well throughout challenging times ahead. The process was reversed 40 years later when Sally’s mother took to her final sickbed in 1997.

Sally writes, “I wanted to help my mother through this time. For her part, she wanted to tell the stories that she knew, to make sure that she could leave behind her an understanding of our family’s past. Together we taped the conversations that covered this information. I listen to our conversations now and again and relive what was a difficult but also special time for us both. With photographs picked randomly from boxes acting as aide-memoire we conversed in an intimate but strangely impersonal way, I was pleased to be able to keep my mother’s mind off her illness. But most of all, while I knew I couldn’t maker her better, I wanted to make her feel better, perhaps as she did me during my childhood illnesses.

Obviously there was no intent for therapy in our sessions, and there were no trained counsellors present, but my mother and I became able to communicate in ways that were different from how we normally spoke. We spoke of people, places, events and their associated stories that we rarely discussed otherwise. While we each harboured our own thoughts, fears and distress, we could and did get through that difficult time together. As it was a cathartic experience for me, I cannot imagine how I would have coped otherwise. Our process of coming together, even as my mother died, was facilitated with photography.”

For Sally, her actual taking of photographs was intuitive: the process — unconsciously undertaken at first — eventually led to the planning of seemingly non-complex images to connect with underlying emotions to connect with underlying emotions that were, at times, overwhelming; the comprehension and analysis only shared decades later. Formalising her love of the medium by studying, facilitated the eventual verbalisation — revealing layers of meaning within photographs that Sally has taken over five decades. She writes that “Having learned to read photographs, I can look back and read my own photographs as I might my own private diary, a diary that is written in code, where only I have the key.” Not obvious to anyone, her private thoughts are encoded within the images, different layers of meaning revealing themselves at different times. “Had I only my diary entries to rely on, my recovery from a post-traumatic stress disorder following prolonged abuse from a non-family member in my childhood, might not have been achieved and this book would never have been attempted. I believe I would, at best, be stuck in denial and, at worst, well, I really don’t know.”

The camera has made Sally feel completely free, but it took her half a lifetime to realise that there were different ways in which she was using photography. Attention to detail and a heightened sense of perception were natural, becoming more so by being faced, and dealing, with a prolonged and dangerous situation at a young age. Both are also attributable by-products of a life with photography. This combination opened her eyes and mind to both her internal and external worlds giving her something to rely on, the will to survive and the strength to heal.

Also Sally added, “ Looking back, I can see how lucky I am that photography has fitted in with most of my working life because now I have a visual diary of thousands of images, representing — and, importantly, offering proof — of the years, days and hours spent doing something I enjoyed which has gone a long way to negate the effects of the darker memories.”

With photography is honest and raw, an engaging book on many levels and one that affirms the importance of photography in our lives. Throughout the book, Sally pinpoints and unpicks the medium, discouraging today’s tendency to take photography for granted. See www.withphotography.co.uk for book enquiries. 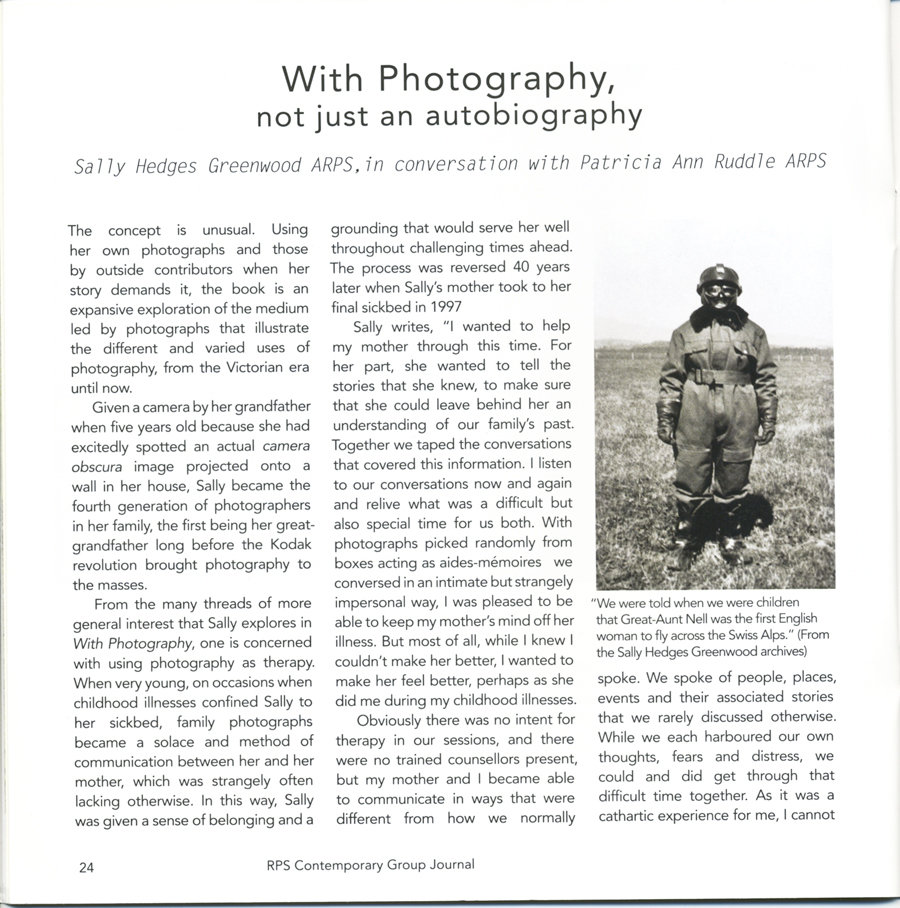 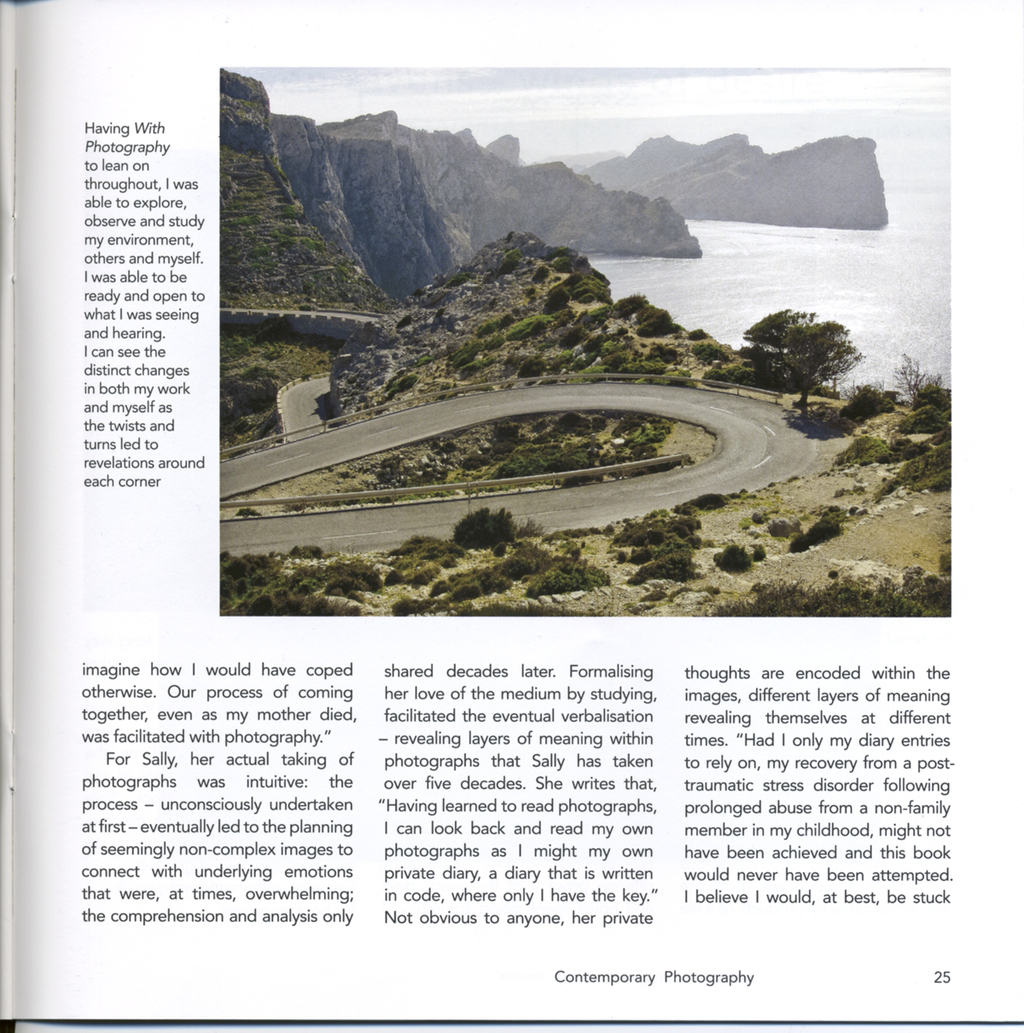 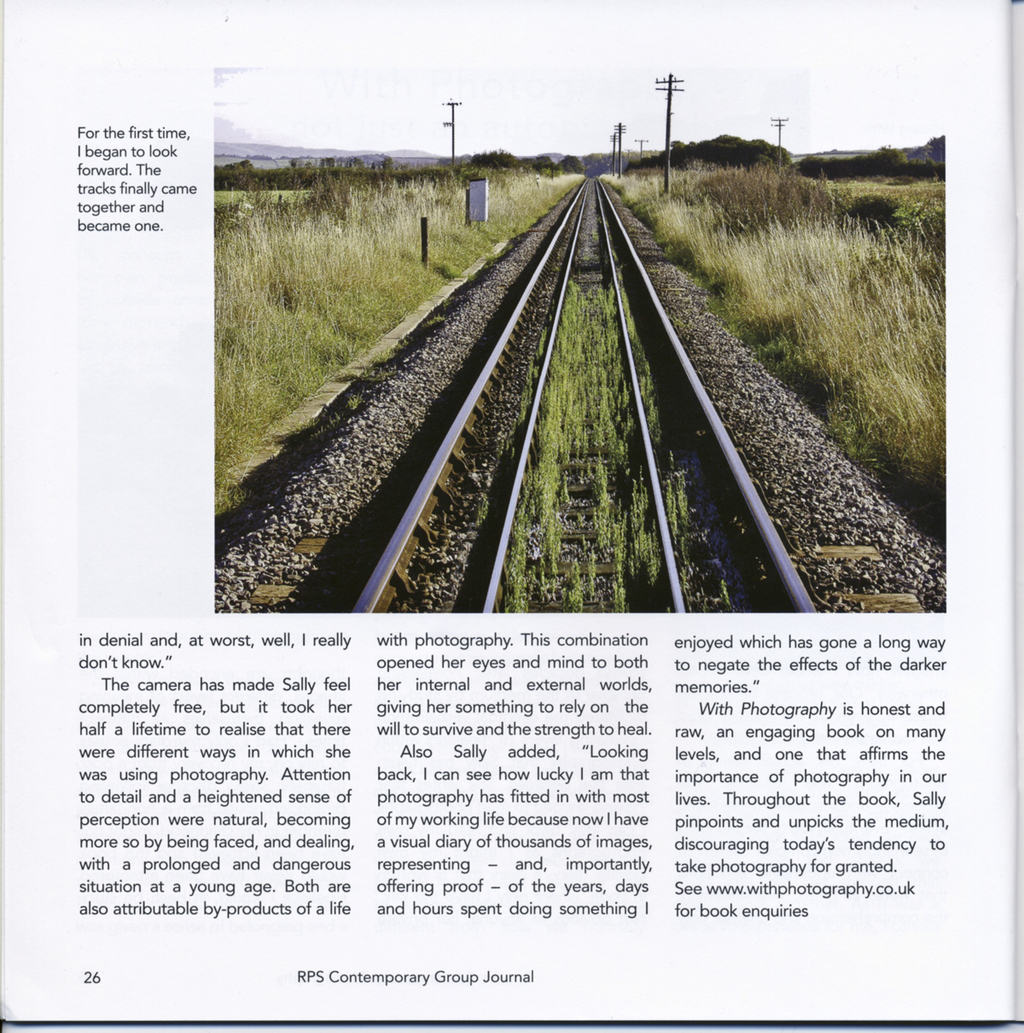 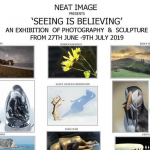